An Historically Important Kumete Whakairo (Carved Lidded Presentation Bowl) The large and impressive kumete carved with two figures each modelled in a crouching position holding the bowl in their outstretched arms and supporting it on their legs with their chins resting on the bowl rim. Each figure with four fingered hands and naturally rendered face decorated with ta moko. The bodies of each extensively carved with rauponga (notched ridges and parallel grooves) and pikorauru (spiral) designs. The bowl is extensively carved with a fine design of rauponga conforming with the design on the figures. Each side of the bowl is carved with an ancestral figure rendered in low relief with a wheku head and protruding tongue. The carved lid with two outward facing relief carved figures with splayed legs held in their three fingered hands. The head of each carved in wheku form with protruding tongue. Each figure decorated with rauponga and with pikorauru designs to the shoulder above the main lid section which is decorated with further rauponga patterning. Superb overall colour and with rich patination to the head of each crouching figure. Provenance: Gifted by the chiefs of the Te Arawa tribe to Robert Graham M.P in 1878 in acknowledgment for his work in settling peace over a land dispute between the chiefs Te Pokiha of Ngati Pikiao and Petera Te Pukuatua of Ngati Whakaue: Retained in the Graham family collection from 1878-2009. Sold by Dunbar Sloane Auckland in November 2009 Private collection Auckland 42cm width, 30cm height. Y14036 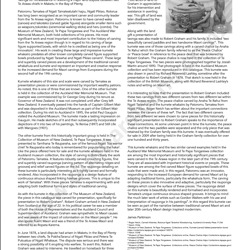 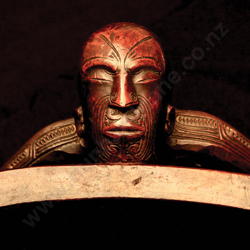